Questions that will be answered are:

New SAP installations only use the newest method by default. Older system still might have stored older versions.

When a users password is set initially or is changed is it hashed and stored in 2 tables:

Older systems or wrongly configured systems store all the 3 password types mentioned above.

To start the password attack you need to get the user ID’s and hashes from the USR02 table.

Methods for getting this data (and many more):

For this weeks example we will use a couple of testusers. The first 5 users are given simple passwords. The 6th user is given a fully random password.

When you have the hashes all of the rest is now outside of the SAP system.

Hashcat is based on GPU power and not CPU power. This means the speed of cracking depends on the quality and speed of your graphical card(s). Modern graphics card can have up to 4000 cores. Hashcat is written intelligently to use these 4000 cores via parallel processing or multiple cards.

Download the software from the site and unzip it on your local PC.

Hashcat requires for cracking BCODES the following format per line:

For the example above this results into the following file: 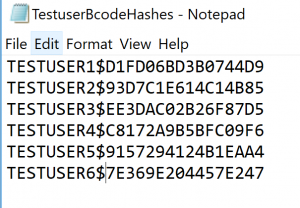 Let’s start by making a file with only TESTUSER6. This is stored in the file TestuserBcodeHashes.txt.

To start the hacking process goto the CMD command prompt and goto the hashcat directory. Then key in this command:

Long command, but some part are simpler: -a 3 means brute force, -m 7700 means hashes are SAP BCODE hashes, file output and output, and very important the command to abort if the GPU temperature exceeds 80 degrees celcius.

For full help options: goto the Hashcat website or key in Hashcat64 –help.

Result of this command is following screen:

The brute force attack will use some common pattern, but as you can see per pattern it takes about 16 hours (faster GPU means less time).

Pretty good you would say. But nobody uses the brute force method.

People tend to user more simpler and more repetitive passwords. See wikipedia for most common and 10.000 most common used passwords.

Again we start now Hashcat tool, but now with different command and we will use the file with all the 6 hashes:

Attack mode (wordlist) is chosen and we have given the 10k most common text file as wordlist input. Recovered passwords: 5 out of 6 in about 0 seconds!

You now can logon with these passwords.

This means that we can decrypt the password way much faster than the theoretical example from previous chapter.

Set paramater login/password_compliance_to_current_policy to 1 to forbid the old passwords to be used (in old systems this might require some testing before it is done in productive system, and changes of old passwords that are there for very long time).

Prevention 3: clean up the old hashes

Use program CLEANUP_PASSWORD_HASH_VALUES to clean up the old hashes:

After checking, start the actual cleanup.

Prevention 4: instructions to basis and authorization team to use the password generator for initial passwords

Also you should make it known to basis and authorization team not to use simple and repetitive passwords like Welcome-2018 or Passw0rd! Soon you will see a pattern and can already guess new users passwords that they will select. Tell them to use the password generator.

The next blog will explain on the hacking the SAP PASSCODE.

This site uses Akismet to reduce spam. Learn how your comment data is processed.